FitKids360, a free seven-week program, helps educate families about nutrition, exercise and living a healthy lifestyle. Developed in Grand Rapids in 2010, the program is now expanding across the state of Michigan.

Thanks to a partnership between Health Net of West Michigan and the Grand Traverse Bay YMCA, the YMCA has hosted the FitKids360 program in Traverse City. It’s also spreading into Kalkaska and Benzie counties through a United Way grant.

The Klama family participated in the initial Northern Michigan program at the Grand Traverse Bay YMCA and greatly benefited from the experience.

“Honestly, at first I walked in with a chip on my shoulder. I felt bad about how we were leading our lives—putting our health, my son’s health, after everything else. But from the beginning, it was clear this wasn’t about finger-pointing,” explains Nicki Klama, who did the program with her now almost 13-year-old son, Sam, based on recommendations from their pediatrician and social worker.

“We learned new ways to get active. We were taught how to read nutrition labels, and that being overweight and all things that go along with it may NOT just be about overeating.”

Sam’s favorite part of the program was going to the gym and “being silly” with all the other kids. And for Nicki, it was realizing she wasn’t alone.

“I’m not the only parent who is dealing with not having enough time or not enough money in the budget (to make healthy decisions),” she says. “The class may be called FitKids, but it’s about the whole family. And it’s not just about exercising.

“It’s a great place for your kids to open up about their concerns. The social workers are all fantastic; they make you feel super comfortable and at ease. I love the continual support. 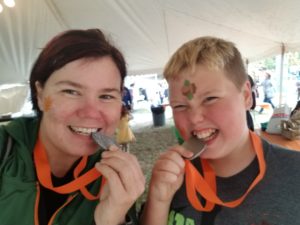 “It was a fantastic experience. My son even wanted to volunteer to be a mentor in the last session of 2018. So we did!”

Now that they’ve completed the class and mentorship, the Klamas have continued making healthy decisions. They’ve kept their YMCA membership and exercise several evenings a week and most weekends. They also walk every weekend (when it’s not too cold), and they bike more.

“Because of the FitKids program, Sam had more confidence last year and finally learned how to ride a bike,” Nicki says. “He loves to collect rocks, shells, etc., so I tell him that when we go hiking, he can collect and bring home whatever he can carry. That definitely keeps him engaged longer.”

They’ve even taken their exercise routine to the next level thanks to inspiration from FitKids. “I started running last year, and Sam has done a few 5Ks and obstacle runs with me,” Nicki says. “Previously he would never have even thought about doing that!”